From the minute Jack was born, it was pretty obvious that he was mine. The poor kid. He looks exactly like me. We came out of the womb looking exactly the same, and from here on out he’s getting more and more like me.

The problem? He also has my personality. Which makes him stubborn. And always right. At the moment he’s approaching 4, so we’re needing to discipline him from time to time. 99% of the time he is a great child. 99% of the time he is a polite and loving child, and he and his sister have a beautiful relationship going on. We understand how lucky we are.

It’s the 1% of time when he decides he’s the boss that we seriously clash. Inevitably, I get to the end of an argument with him and realise that I can’t be mad at him, because he’s doing exactly the same thing I would have done. Deep down I’m trying not to laugh as the reality sets in. A good 20 more years of this. 20 more years of facing off against a nemesis from my own DNA. Like Darth Vader staring down Luke, waiting to see who blinks. 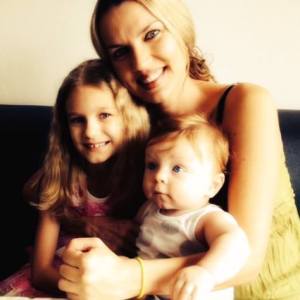 Angie of course, beautifully natured and rarely mad (only at me), can’t handle any conflict, so Jack is immediately forgiven for all wrong doing. ‘He’s just too damn cute’ she says, giving up on her anger and smothering him with cuddles. Side note – Angie maintains that Jack has her toes – she’s really clutching at straws here. I maintain they all have her bum chin (see right), but I digress.

Discipline is a touchy subject. It’s something that can cause arguments between parents, between couples. I was smacked as a child and I’m sure I deserved it. I still turned out fine. Angie (the yin to my yang) was of course an Angel in her youth and never in trouble. Despite the differences, we both agree and are against smacking our children. We never have. I’m thinking some big kid will put him in his place in the school yard at some point and he’ll learn to bite his tongue.

So as he grows up, I’m sure I’ll need to continually learn. He’ll continue to want his independence, he’ll continue to want to grow into his own mould. Realistically I need to learn to argue with myself. Because that’s who I’m fighting against. I can feel my parents laughing somewhere off in the distance whilst Jack and I disagree on whether he should apologise to his sister or not.